October 26, 2022 – ToBRFV, or Tomato Brown Rugose Fruit Virus, is a seed-borne virus that affects plants in the Solanaceae family, most notably tomatoes and peppers. The virus, first discovered in 2014, can render fruit unmarketable, leaving wrinkly spots, or rugose, on the fruit, and impacting the appearance of the leaves. The virus is highly transmissible and is categorized as a quarantine pest in North American Plant Protection Organization (NAPPO) member countries: Mexico, the United States and Canada.

Currently, there are no treatments for ToBRFV and sources of genetic resistance have yet to be discovered. Pest management practices include cultural controls, like strict sanitation and, most importantly, sourcing virus-free seed.

According to Agriculture and Agri-Food Canada (AAFC), Canada produced 256,361 metric tonnes of greenhouse tomatoes in 2020, with a total farm gate value of $665.9 million and most production (71%) taking place in Ontario (AAFC, 2020). Although tomatoes are produced here in Canada, most seed for commercial production is imported. ToBRFC has been confirmed in the United States and Mexico and off the continent in Italy, Saudi Arabia, Israel, Jordan, and Turkey (ASTA, 2022).

With the movement of the pest being strictly controlled in North America, there is a significant threat to Canada’s horticulture industry. While developers are looking at techniques to control the virus’ impact, NAPPO members are working on harmonizing diagnostic protocols to alleviate delays and reduce testing costs to facilitate trade. The ToBRFV testing project aims to evaluate the molecular diagnostic protocols used in different jurisdictions to develop a NAPPO standard protocol to evaluate seed in the future.

The project is ongoing, with a highly coordinated team of experts from across the continent working together in various subgroups. Canada is participating with four representatives from the Canadian Food Inspection Agency (CFIA) and one from industry (Lauren Comin, Seeds Canada), serving on the expert group.

Updates on the project will be provided to Seeds Canada members at the next Vegetable and Garden Seed Policy and Issues Committee Meeting in early 2023.

Seeds Canada is the leading voice of the seed sector in Canada, with members including analysts, breeders, distributors, processors, seed growers and other contributors to the industry, located from coast to coast. Seed is the vital first link in the agriculture value chain, contributing over $6 billion to the economy, employing more than 63,000 Canadians, and exporting more than $700 million annually.

October 5, 2022 – In September, I had my first opportunity to travel internationally representing Seeds Canada, attending the Seed American Association (SAA) Congress in Punta del Este, Uruguay. SAA represents the interests of the Seed Industry within the Americas. Seeds Canada is a member of SAA and has a representative serving on the SAA Board of Directors. 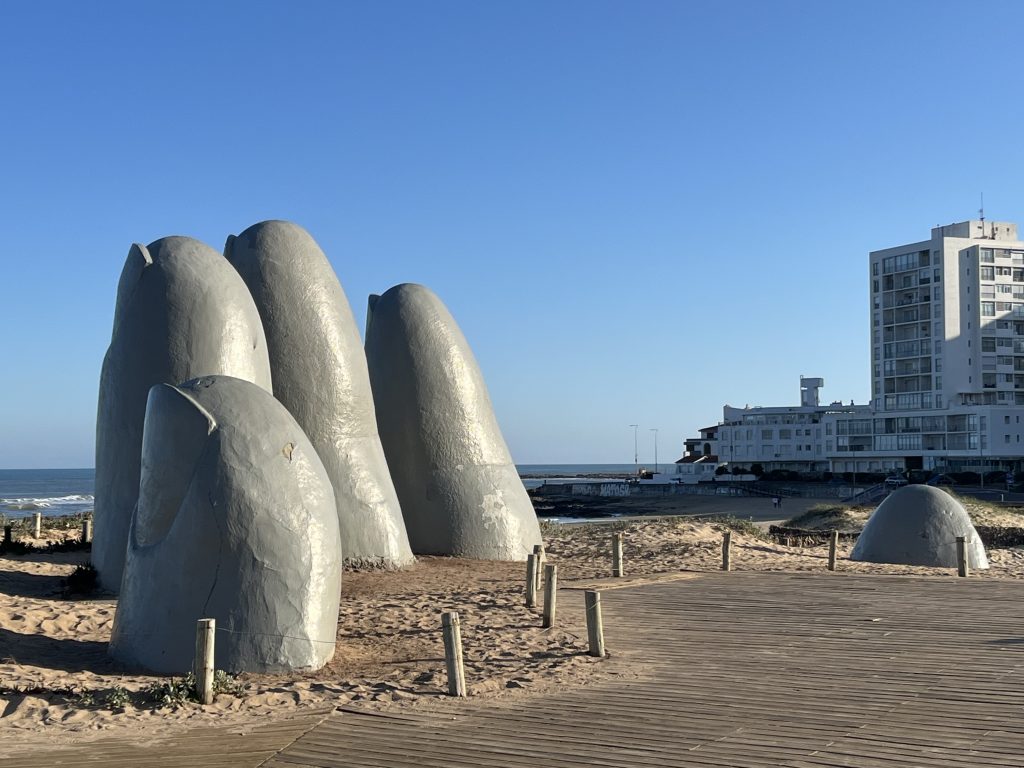 This trip was my first to the southern hemisphere and, despite my best efforts in planning, my travel to Uruguay didn’t exactly go smoothly. Prior to leaving, I tried my best to ensure my vaccinations were up to date, although, it wasn’t clear which ones I would need, and my historical records were a mix of incomplete handwritten papers and modern electronic listings. I, of course, needed proof of covid vaccination to get into the US and Uruguay, but, which documents, or records would serve as adequate proof was questionable. So, I brought everything: papers from the pharmacy, the Alberta Health QR code, all my written and digital records.

I arrived in Houston to discover that my flight to Buenos Aires had been cancelled due to maintenance issues and rescheduled to the next morning. This not only necessitated a night in Houston, but also meant I couldn’t fly from Argentina to Uruguay until the following day adding an additional night in Buenos Aires that I hadn’t prepared for. Being Canadian, I’ve done my best to master both French and English, but my Spanish is “no es bueno”. This didn’t make anything easier.

What is the point of this sob story beyond trying to garner some sympathy?

International movement of people and goods is rarely straightforward. Unfortunately, our seed system is global, and this can’t be avoided. In Canada, we rely on southern regions for contra-season nurseries to allow advancing of generations and bulking of seed stocks more quickly. Seed needs to move down, and then back up. Many of our crops are not conducive to seed production in Canada at all, so we rely on international imports. Once a crop is grown, we also need to ensure that a particular variety or seed treatment is approved for import in that market. 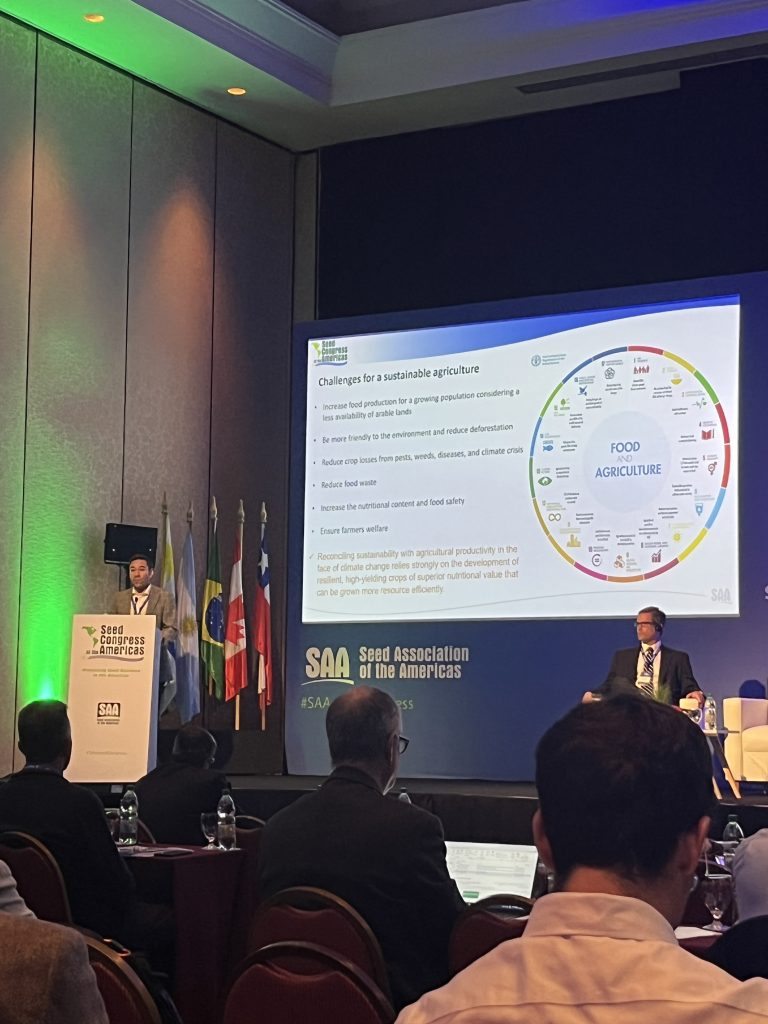 A large portion of the conversation in Punta del Este focused on the need and benefit of harmonization of practices amongst countries. Phytosanitary requirements differ in each jurisdiction and are regularly evolving. Side meetings were held with Servicio Agrícola y Ganadero (SAG), the national agency responsible for plant protection in Chile, to discuss phytosanitary issues and inspections of Canadian contra-season canola production. While differences in process may cause frustration, it is obvious, not only from this meeting but from the plenary sessions, that the desire to collaborate, cooperate and harmonize is strong. Meetings like the SAA and national seed trade organizations provide venues for these discussions and, hopefully, lead to stronger relationships in the future.

Harmonization of plant breeding innovation policy and regulation was also a hot topic on the SAA agenda. South America is generally progressive in embracing genetic technology, with a few exceptions like Peru, similar to Canada. However, recent referendums held in Chile, which considered modifications to the country’s legislation and acceptance of biotechnology, could have created major issues for the Canadian seed trade. Health Canada’s recently released guidance on crops developed via gene editing, as well as the proposed direction from the Canadian Food Inspection Agency (CFIA) was given a nod as progressive regulation which other countries should seek to aspire to. While the Americas may have reasonable harmonization, the same cannot be said for the rest of the world, and much work remains.

The SAA Congress wrapped up by discussing a topic that seems to be on the agenda at any ag conference, no matter the location. Conversations on sustainability in the seed sector focused not only on the contribution of seed and associated technologies to help improve soil health and mitigate, as well as facilitate adaptation to, climate change, but also on the seed sector’s role in responsibly using resources, including land, water, and people, in production. If it hasn’t already, sustainability may become yet another metric that allows- or impedes- movement of seed within the global marketplace.

I’m looking forward to continuing these conversations with the international seed community. However, hopefully next time with fewer obstacles to my movement.

Seeds Canada is the leading voice of the seed sector in Canada, with members including analysts, breeders, distributors, processors, seed growers and other contributors to the industry, located from coast to coast. Seed is the vital first link in the agriculture value chain, contributing over $6 billion to the economy, employing more than 63,000 Canadians, and exporting more than $700 million annually.